built to meet the highest demands: Yours"

Founded and hand built by Stefan Kraatz in January 2020, Kraatz Studios is located in Berlin‘s pulsating Mitte district. The highly skilled and experienced studio team has a long track record of providing award-winning sound and audio bespoke to your individual production needs. TV, radio or cinema campaign, feature film, any form of sound design, music production, mastering, or anything in between – when it comes to sound and audio, Kraatz Studios is happy to offer the full package.

Equipped with high-class preamps, an exclusive selection of microphones and 16 inputs total, the studio offers a comfortable 13 m2 soundproofed recording room. The room within a room concept was implemented focusing equally on extraordinarily high isolation as well as the careful use of sustainable materials. Due to its flexible partitions, the studio can be specifically modified to fit all kinds of recording needs and purposes from voice over and vocal recording to multiple instruments recordings.

When faced with challenges, we love to experiment, test our limits and even break the rules to find the perfect sound. With our steadily growing sound archive, virtual and real instruments, synthesizers and the possibility to record our own foleys, we can create the ideal sound design for your individual project.

Our control room is acoustically measured and provides high-end analogue and digital equipment. For all advertising projects we produce and finalize broadcast quality mixes in specific specs for TV, online, radio or cinema. For all our music productions we can deliver DDP CD master, vinyl master or master files for all digital formats incl. mastered for iTunes.

We produce music for musicians, bands and commercials. The studio is equipped with a huge array of guitars, amps and drums to find the perfect sound for almost every genre.

Stefan Kraatz
Born and raised in Braunschweig, owner Stefan Kraatz has been living and breathing music for all of his life. After his graduation he studied sound engineering in Berlin, founded a music label and set up his first home studio. In the meanwhile, he built a large network in the music industry, performed as a DJ in Berlin and toured Europe with various known musical artists. For more than 15 years Stefan has been working as a high profiled audio engineer at various well-known studios. In 2020 he finally founded his own studio: "Kraatz Studios GmbH."

Maurice Krämer
Originally from the north of Germany, Maurice Krämer has been living in Berlin for more than 10 years. He studied sound engineering in Hamburg and Berlin and played Europe‘s clubs as a DJ for over more than a decade. Speaking of experience: Maurice’s occupation as an audio engineer and producer for several well-known studios spans the same amount of time. In 2020 Maurice founded “Word Up”, a voice talent management service. He will contribute and advise you as an equally reliable and experienced audio producer at Kraatz Studios.

Jonas Mantey
Growing up in Berlin, Jonas Mantey naturally developed an interest for the citys infamous electronic music scene. After a couple of releases he started touring Europe as a live act and DJ besides still being in Highschool. After graduating he continued this journey while consistently growing his skills as a music producer and sound designer. In early 2021 Jonas joined Kraatz Studios as the engineer of the newly built „Studio B“ to meet the Studios growing popularity 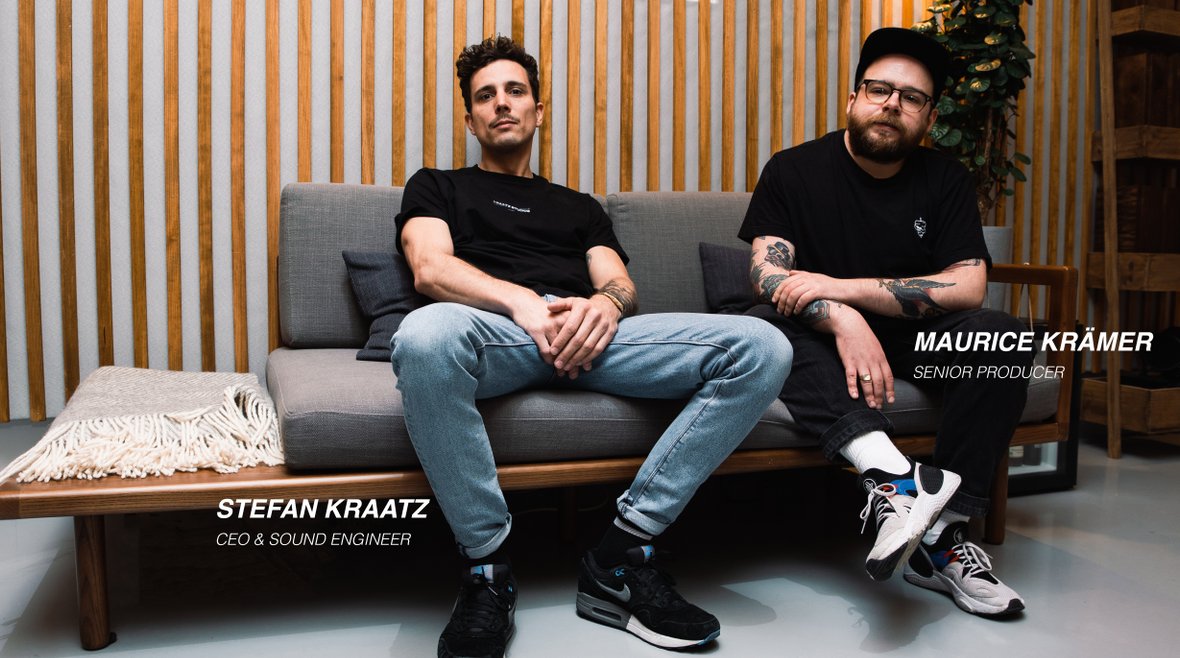